As the cornerstone of any academic institution, libraries and their collections are built to support the institutions they serve. The collections in the STM library support the Liberal Arts disciplines taught at the college, with an original focus on Philosophy and Catholicism. In recent years, that has broadened to include materials in many global faiths and spiritualities and has concerned itself with both human and global issues of the 21 Century.

As living entities, libraries grow and change over time. The first STM library began in 1927 in the white house which then housed St. Thomas More College. The book collection started with a few books purchased by Fr. Markle, and as the collections grew, the library moved to a larger space in the white house. In 1956, the library was moved to the beautifully paneled room with an upper balcony in the main corridor of the original stone building. It outgrew that space and moved in 1964 in the newly constructed library wing. This was achieved in part due to a Canada Council grant of $268,911.00 for the Library and the Art Gallery. The entire cost of the construction for this wing, including cafeteria classroom, and second floor offices was $750,000.00. During this time, it was named after the Shannon brothers who had constructed the original stone building.

Please see the sections below for additional information and time-lines.

Shannon Library Through the Decades

St. Thomas More College made its first home in Newman Hall, typically called the White House on College Drive, on the University of Saskatchewan campus. The Library began with just a few books purchased by Fr. Basil Markle in 1927. The collection slowly growing over the next few years. 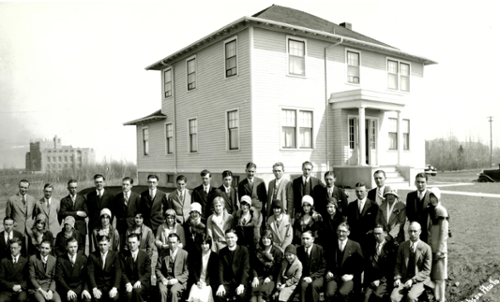 In anticipation of an influx of students at the end of WWII, STM College added an expansion to The White House. In 1943, the St. Thomas More library was relocated to a large room in the addition. 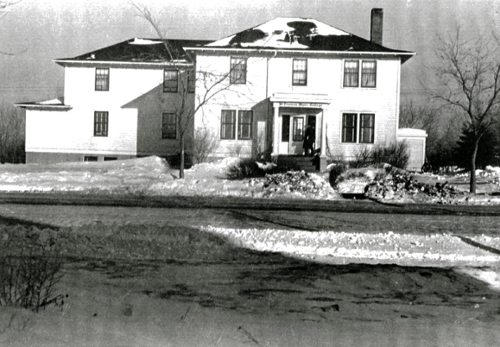 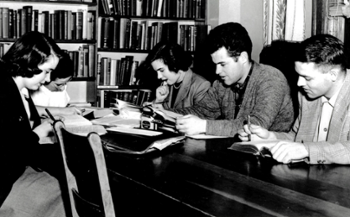 Students enjoy the library in its new space, 1953

The library and its growing collection was housed in the enlarged quarters of the expanded white house for more than 10 years. Eventually, the increasing number of students required an entirely new building.

Relocated into the stone building

An increasing number of students required the construction of a new building. 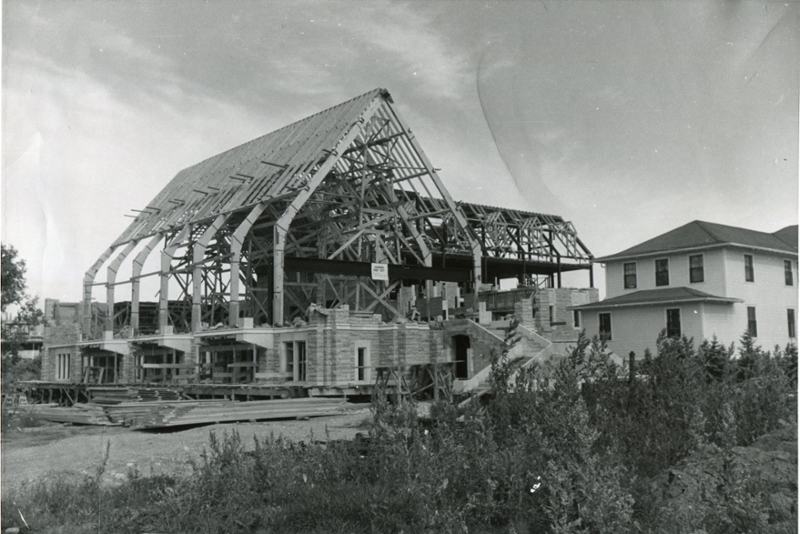 Once the Shannon brothers completed construction of the first section of the greystone building in 1957, STM library occupied the oak panelled room now known as Chelsea Commons, located in the main corridor of the original stone building.

The library was complete with a mezzanine and alcoves which comprised the stacks. An iron circular staircase was used to access the upper levels; the infamous staircase was transported to the new library location in 1963. The students enjoyed this unique, quiet space for less than 10 years before the collection quickly outgrew this room. 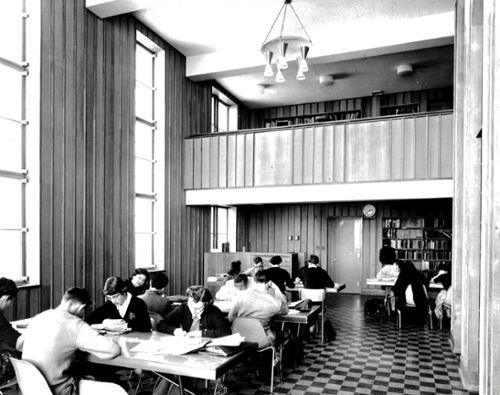 The photo above is taken from the ground level of the library, with a view of the mezzanine above.

From the mezzanine itself, one can see the original double height library. The iron staircase is in the rear alcove on the left.

The dramatic increase of student registrations in the 1950's required St. Thomas More Colleege to  undertake a major construction project. Expansion began with the erection of the original greystone building in 1954. Phase two of STM College began in 1962 with an addition of a new wing. A spacious library and stack area was given top priority. A grant was received from the Canada Council for $268,91.00 to construct the library and art gallery. The library encompassed the second floor of the new building, and a cafeteria was on the ground level. The entire cost for this addition was $750,000.00 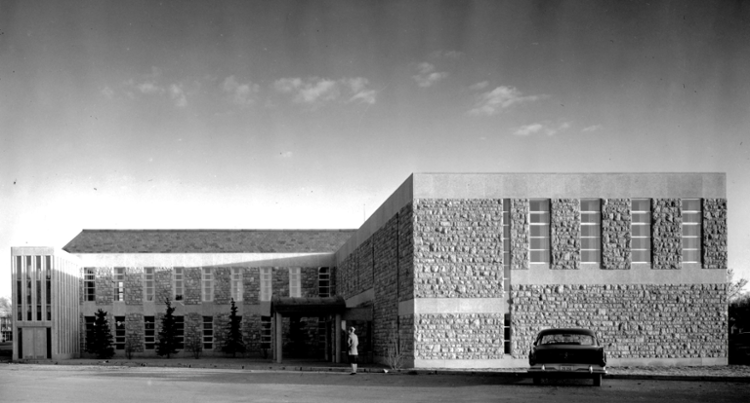 In just 12 years, St. Thomas More College went from a small white frame house to almost 58,000 square feet of stone and steel. The new addition had its official opening ceremonies and received a blessing February 6, 1964.

Named to Commemorate the Brothers Who Constructed the Original Stone Building

Shannon Library created a computer lab to prepare for the launch of new networking technology, funded in part by $500,000 that STM recieved from the province’s Centenary Capital Fund.  Offices were renovated and removed to accommodate for needs of faculty, staff and students in the future. A ribbon cutting ceremony to open the new computer lab, pictured above left, was held November 15, 2000. Glenn Hagel cuts the ribbon joined by, from left, STM President Rev. George Smith, MLA Graham Addley, MLA Peter Prebble, and STM Library Director Dr. Donna Brockmeyer. Proposals and ideas were submitted but the design ultimately chosen by Brockmeyer for the computer lab is pictured above on the right.

In July 2001, custom oak and glass display bookcase and shelves were designed by Brockmeyer and built to accommodate the Anglin Collection in Catholic Church history. They were made possible through a $10,000.00 donation from Evelyn and Isobel Burkittt. They add style, charm, and architectural interest to the library while offering the functionality of a space that is able protect and showcase some of the rare and  valueable items in the collection. The Burkitts later donated an additional $275,000.00 toward library renovations and scholarshps.

Historically, prior to 2001, shelves hung on the back wall (seen above). They did not offer enough space for growing collections, nor did it add to the sophisticated look Shannon library is now known for. The new custom design doubled the amount of shelf space at the back of the reading room.

2003: Merge of STM and U of S Library Catalogues

Launch of the Library Catalogue Integration

In 2002, STM’s Shannon Library and The U of S Library entered into a Library Catalogue Integration Agreement which founded the merge of the two library catalogues. This agreement was similar to one that Dr. Brockmeyer has developed for NEOS, in Alberta in the early 1990s. This milestone at STM was long awaited; the idea was first proposed in 1989, and options and estimates for this initiative were investigated many times since.

Finally realized in 2003, the merge of the catalogues enabled students, researchers, faculty and staff to quickly find all combined holdings.  This collaboration meant new book acquisitions could be coordinated more easily, avoiding duplication and making better use of funds. As well, it enabled better use of  government funds by sharing resources and improve tecnological accessibility.

This merger has reinforced and strengthened the partnership between St. Thomas More College and the University of Saskatchewan, at a very nominal fee.

Library Board of Governors
Approves The Expansion to Shannon Library

The Board of Governors approved a north expansion, which allowed for a newly configured library space. The new space was primarily dedicated to book stacks, amalgamating the entire collection onto one floor. The space also featured seating along a vast expanse of north-facing windows, as well as a fire-place seating area.

This 498 sm (5360 sf) addition included the preservation of three exterior walls. The existing stone design was an important piece of architectural history which added to the heritage and charm of STM. The stones of the exterior facade were cleaned and kept exposed to add character as the interior walls of Shannon Library, helping to blend old and new elements. Connecting the three existing walls is a smooth, curved, curtain wall, constructed to be highly distinguishable from the original architecture, rather than compete with the existing design.

Construction for the New Expansion
Lasted for More Than 15 Months

Shannon Library remained open throughout, with limited access for students and faculty. 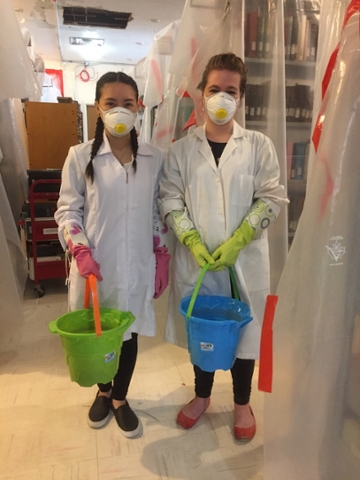 This Romanesque / Renaissance library was designed and renovated under the
direction of Dr. Donna Brockmeyer, Library Director 2016 - 2017. 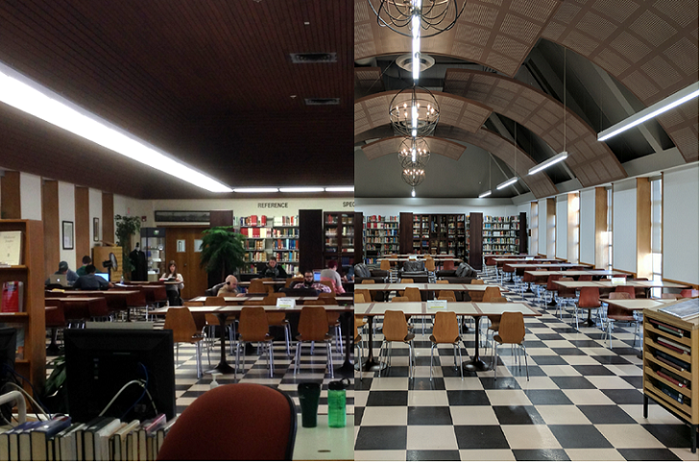